Compressors are a necessary part of sound recording and reproduction, primarily and originally as a device to control the volume level within a range suitable for domestic (or theatre) listening, but also, and more importantly, to add an additional dynamic ‘feel’ to an audio signal. Commonly, these dual purposes are combined so that the compressor becomes an essential tool for both  the recording and the mix engineer.

Analogue compressors are particularly good at controlling volume levels and work as useful tools for individual instruments in a recording.

Digital compressors and ‘plug-ins’ excel as volume limiters but often fail to match the effects possible on analogue devices.

An ongoing problem with all types of compressor whether new or old, is to get a fast smooth attack without compression overshoot, that is, when there is an audible ‘ripple’ immediately following a sudden transient.  It is an effect that even shows itself on BBC TV in some classical music feeds.

Analogue compressors are generally ‘feedback’ types, they operate by sensing audio levels at their output and then applying correction to a gain reduction stage near the input. This arrangement works well, but it is liable to suffer from ‘overshoot’ where when faster attack times are demanded, the control system fails to react efficiently causing momentary peak overloads and dipping effects.

Digital compressors are normally ‘feed-forward’ types where the incoming signal is sensed and used to control the gain of the audio path. Most are modelled on historic analogue compressors with varying accuracy.

The 588 operates as a ‘feed forward’ compressor sensing the incoming signal and immediately sending a control signal to a gain-setting circuit near the output. The control signal circuitry sets the momentary compression ratio and the audio signal is instantly controlled by the control signal and the switchable attack time.

The ‘sound’ of this compressor is consistently superior because of tonal effects created during the compression process. A digital compressor handles audio totally symmetrically; any minor distortion produces symmetrical (odd order) harmonics. These extremely small errors influence the sound in an unnatural way, they produce a slightly flat clinical effect.

The 588 compressor operates more naturally; the harmonics generated by the compression process are asymmetric (even order) similar to effects common in nature and pleasant to the ear.

This sounds technical and complicated but the effect is clear and simple; The 588 brings audio into focus; it is like having a variable contrast control, particularly effective for clarity and for bringing a solo voice forward and more present in the mix.

Digital compressors need a clearly defined ‘knee’ point where the compression curve starts to operate (see graph).  The 588 is more of a true limiter/compressor where there is no specific knee, the compression starts at a very low ratio increasing with additional volume and approaching volume limiting at maximum. 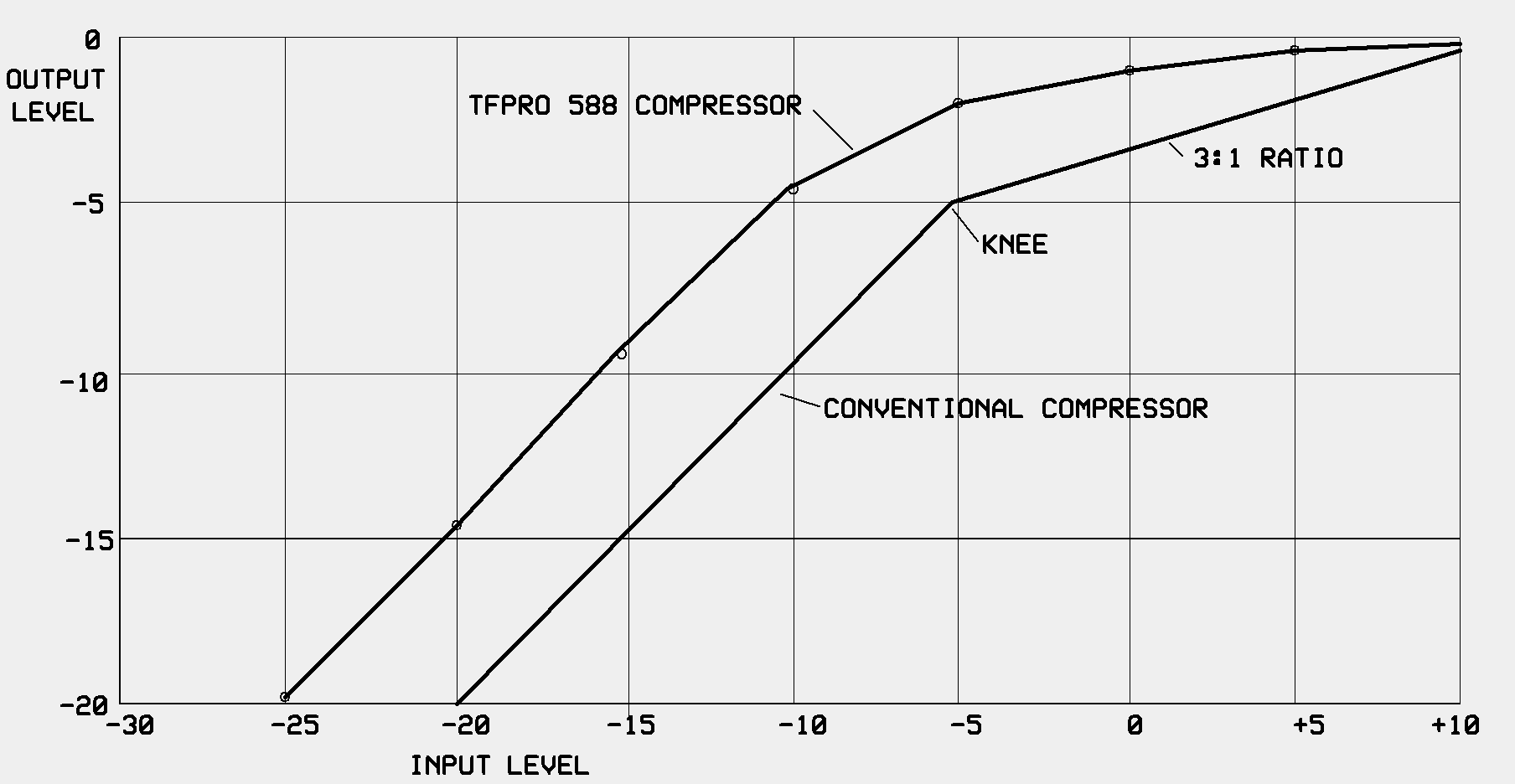 In common with the best analogue compressors, the 588 avoids ‘clipping’ transients and retains the ‘life’ of dynamic tracks.

The feed-forward compression has the effect of giving greater separation to events adding clarity to bass frequencies and pulling the sound source towards the listener.

Most significantly, the 588 eliminates compression ‘overshoot’ and can use short release times without obvious over-compression.

To make the compressor fast and easy to use, the controls of the 588 are few and simple. The compression ratio varies with the input level and so a ratio control is not necessary. Compression effect is controlled by careful adjustment of ‘gain’ and ‘make-up gain’ (in common with early analogue compressors).

The attack time is important but not critical so a simple 3-position switch is ideal.

One surprising attribute of the 588 is its effect on the human voice; the compression has the effect of moving the voice closer to the listener, adding ‘presence’ and improving the clarity of the speech.

The 588 is a 500 series single module for individual channel volume compression.

The special characteristics of the 588 are:

The 588 is designed to operate in a studio environment with balanced or unbalanced audio signals in the range -10dBu up to +8dBu.

With the BY-PASS push-button in the out position the audio routes directly through to the output. In this mode the compressor is active but is not connected to the output.

When the BY-PASS button is pressed the ‘in’ red light appears and the compressor is linked to the output.

To increase compression turn up the input gain control; this should be done carefully as it is easy to over-compress the audio.

As compression increases the compression ratio automatically rises until when the output level approaches +4dB (with the make-up gain at No 7), the ratio is at or near 12:1 and so will not rise further.

The make-up gain control is used to control the audio level to equipment following the 588, it has no effect on the compression.

When the audio is being compressed more than 3dB, the yellow LED at the top of the module starts to show. This works as a useful indicator for the amount of compression in use.

The ‘normal’ attack position should be useful for most compression.

In the ‘slow’ position attack time is reduced to about 100 milliseconds.

In the ‘fast’ position the attack is virtually instantaneous.

The 588 was initially designed as a speech compressor and for that, the ‘fast’ attack and near minimum release time is most useful.

The 588 has a stereo link facility. Connecting a linking bar to the ‘stereo link’ on each unit will connect the compression sidechains provided that the 500 series rack frame is fitted with a stereo link on pin No6.